"Baldin had a rare voice. The quality of his sound was impeccable."
(Sir Neville Marriner, Conductor) 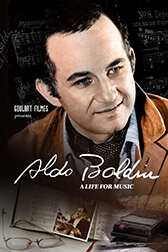 Synopsis: Aldo Baldin - A Life for Music unfolds tenor Aldo Baldin's great talent as he journeyed from humble beginnings in Brazil to international recognition in Europe. Baldin was among the finest tenors in the world during the 1980’s, particularly as an interpreter of Bach's pieces. He worked with conductors such as Sir Neville Marriner, Helmuth Rilling, Herbert von Karajan, Rolf Beck, Karl Richter and Peter Schreier. With longing stories from a wide range of musicians, friends and family members, Aldo Baldin – A Life for Music is a celebration of the unique career of this artist and professor, as one of the greatest classical musicians Brazil has ever produced. 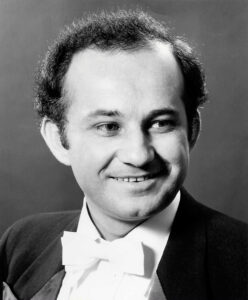 Aldo Baldin was born in Urussanga, Brazil.  A child prodigy in music, he was awarded a scholarship in Brazil for studies in piano and cello, followed soon thereafter by the crucial first studies in voice with Eliane Sampaio and Heloisa Nemoto Vergara.

It was Karl Richter who was instrumental in securing a German Academic Exchange Service scholarship for Baldin to study with Martin Gründler at the Frankfurt Conservatory of Music, where he received a Performing Arts degree.  He continued to study with Margarethe von Winterfeldt and participated in summer courses with Conchita Badia and Noemi Perugia.

While still at the Frankfurt Con­servatory, Baldin was already active as a concert and oratorio soloist and Lied interpreter and was also in demand as a recording artist for radio and record companies.  His discography covers a wide range of recordings of oratorios, Lieder and operas on well-known labels.

Baldin worked regularly with the world's noted conductors and orchestras and performed at international music festivals, as well as in nearly all the great concert halls and opera houses of Europe, Japan and America.  His career as an opera singer began at the Pfalztheater in Kaiserslautern and soon led to the National Theater in Mannheim.  In 1980, he debuted at the Teatro Colón in Buenos Aires and, in 1981, at La Scala in Milan.  He was also hired as a guest performer at the Deutsche Oper in Berlin and at other internationally known opera houses.  He undertook extended concert tours, which brought him to France, Holland, Italy, Portugal, Spain, Switzerland, Israel, Russia, Poland, Czech Republic, Latvia, Iceland, the USA and South America.

The great versatility of his voice enabled Aldo Baldin to apply his interpretative skills to every period of music ranging from the Renaissance to the contemporary.  His areas of specialization in the opera repertoire include Mozart, Donizetti and Rossini; in the oratorio literature all the great works of Bach (in particular the Evangelist roles), as well as all the significant works of Haydn, Mozart, Beethoven, Bruckner, Rossini and Verdi.  Baldin's song repertoire covers not only German Lieder, but also the Spanish, Italian, and French literature, as well as songs by contemporary Brazilian composers.

Aldo Baldin died in Waldbronn, Germany, at the age of 49. 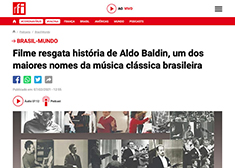 Film brings to light the story of Aldo Baldin, one of the greatest names in Brazilian classical music 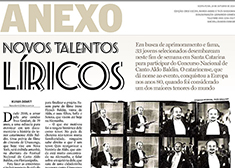 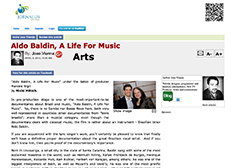 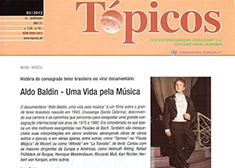 Story of acclaimed Brazilian tenor will become a documentary 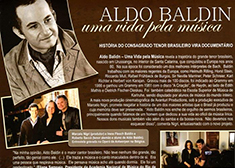 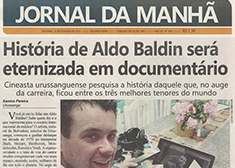